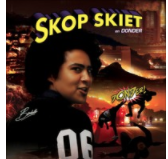 This week I had the pleasure to Review another up and coming Artist named COPA from Cape Town South Africa. The song I’ll be mentioning is “skop skiet en donder” which I have no idea what it says/means but for me, it’s more about the beat of a song over the lyrics any day. The beat to this song had a throwback 90’s hip hop feel to it which I appreciated. I was not expecting that 90’s feel prior to listening to the song. The second thing I thought of whilst listening to this song was, it would do great in an action movie! Or one of those movies centered around an undercover agent/investigator. Go ahead and listen to it, I’m sure you’ll agree with me! Even though I could not understand most of what the artist was saying, I can infer that the goal of the artist was to emphasize the throwback vibe of the foundation of hip-hop and also incorporate his own culture with the language/dialect he speaks in. Apart from COPA’s music, the aesthetic theme of his art on his song covers gives a sort of contrast to the throwback feel of the beat/lyrics of the song, which is quite interesting! Before visiting his social media pages, I assumed the art that went along with his music to have an old-fashioned look to it but I was pleasantly surprised! The galactic look to COPA’s work is the futuristic contrast to the 90’s vibe to his songs. All in all, I suggest anyone who is a fan of 90’s hip hop as well as South African hip hop to definitely check out COPA’s work, you’ll be in for a pleasant surprise.

Here are the various links to his social media/ songs: