He addresses a lot of social issues, including poverty, ethnic tensions, corruption, and the legalization of marijuana. He is also one of the few MCs to seriously and consistently address the issues around refugees. Kenya is home to a lot of refugees from surrounding conflicts, including people fleeing violence in the Congo, Sudan and Somalia.

On the album Refugeenius he collaborated with 20 Refugees from Kakuma & Dadaab Refugee camps in Kenya.

Octopizzo is the founder of the youth group Y.G.B. (Young, Gifted, and Black), which is a collective of MCs, poets, graffiti artists, graphic artists, and dancers. He founded his not-for-profit Octopizzo Foundation in 2015 and through the Foundation, he tries to use culture and sports to reach the youth.

More recently he has joined other activists addressing police brutality in Kenya, and drawing parallels between police violence in Kenya & the US. Recently he was involved in protests in front of the US embassy in Nairobi, holding up a sign of people killed and injured by the police. Recently, there have ben reports of over a dozen deaths at the hands of the Kenyan police supposedly trying to enforce a dusk to dawn curfew put in place to slow the spread of Corona.

The songs featured in the episode are “Nu Afrika” in the opening and “Another Day” in the closing.

The video version of this episode is on our YouTube channel: https://youtu.be/ZOu5ILtZ-Vc

END_OF_DOCUMENT_TOKEN_TO_BE_REPLACED

This is the video of our interview with Lord Ekomy Ndong. The video was originally posted on our YouTube channel.

END_OF_DOCUMENT_TOKEN_TO_BE_REPLACED

Lord Ekomy Ndong, has been a leading voice in the African hip hop scene since 1990, when he founded the Gabonese group Movaizhaleine. Movaizhaleine’s 1999 debut album was Mission Mbeng. He released his 1st solo album, L’Afrikain, in 2003. It is considered by many to be a hip-hop classic. Over his career, he has done collaborations with several artists, and released numerous studio albums.

Around the time of the 2009 elections in Gabon, Lord Ekomy Ndong released the singles “300”, “809” and “Engongol” (What a Shame). The songs were critical of both corruption in Africa, and of France’s controversial presence in Africa.

In 2011, with his 11th studio album, Ibogaine, he once again took shots at France. In the song “Questoins Noires” (Black Questions), he talks directly to French President Nicholas Sarkozy about France’s military presence in Africa. His 2017 album, La Théorie Des Cordes (A Theory of Cords), he reflects on the global protests that took place in the Gabonese diaspora around the 2016 election in the song “Sur mon Drapeau” (By My Flag).

In this interview, we spoke about his career and hip-hop culture in Gabon. We also spoke about France’s occupation of Africa, and the implications of that occupation. We also talked about his outspokenness, and the price paid by musicians who speak out against corruption and politics.

This past May, he released the album Petit Mutant Dans son Coin which can be found on online streaming platforms.

The video of this interview can be found on The Hip Hop African YouTube channel.

END_OF_DOCUMENT_TOKEN_TO_BE_REPLACED 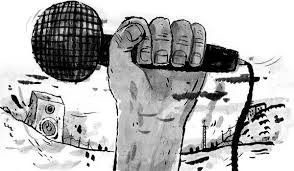 Political rap is a style of rap characterized by the political dimension of lyrics dealing with societal themes, reflecting both a commitment as well as

END_OF_DOCUMENT_TOKEN_TO_BE_REPLACED

‘Jaga Jaga’, which was released in 2004, tackles the various socio-political problems in Nigeria like social inequalities, and bad government and expresses it as a

END_OF_DOCUMENT_TOKEN_TO_BE_REPLACED

Music has been a way to express oneself and reach to the masses for many years. For my theme, I chose songs that express rappers