Aminé is a hip hop artist who has roots in both Ethiopia and the United States. As an artist who grew up in a predominantly white neighborhood, but spoke Amharic with his parents at home, Aminé has cultivated a unique identity that displays his African heritage, as well as solidarity with his Ethiopian background. During his performance on The Tonight Show Starring Jimmy Fallon, Aminé performed an alternate version of his popular song, “Caroline.” 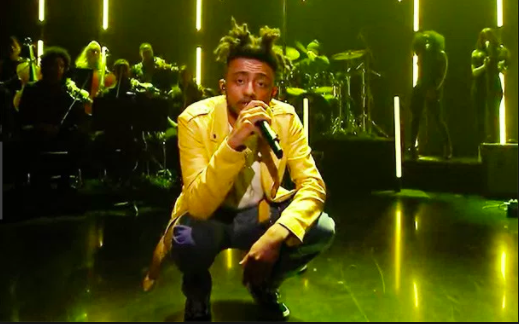 On the surface, this song and music video that accompanies, is a light hearted summer tune. This particular rendition of the song includes an additional verse displaying his disdain for the state of the United States. This performance followed closely the election of President Donald Trump. While Aminé is a first generation Ethiopian, he professes that he is an American who is upset with the election of Donald Trump. He says “I am black and proud/My skin is brown and I’m loud.” Here, instead of shying away from his involvement in black American culture, as someone raised in an African home, he expresses his pride for this side of him. Furthermore, he says “All you ever did was make this country hate again,” again calling on the historical implications of the most recent United States’ presidential election.  Aminé discusses his Ethiopian roots, including where his name comes from, as well as his single “Baba” that followed the popular, “Caroline.” His use of Amharic, and mix of popular black culture is evident in his visuals, and his lyrics. He has spoken out against the stigma of mental illness in the black community, while still finding his identity after growing up around predominately white populations, in which he was called racial slurs, and misunderstood. Through hip hop, Aminé has been able to express this combination of identities in a number of ways that shows his pride in all of the characteristics that make him, him. He shows that he is a product of the diaspora while living in this truth.