The music industry has dramatically grown in the last couple of years despite harsh conditions faced by musicians on and off the continent. Music is sacred because it can calm the troubled mind, take away one’s sense of poverty, inequality, loneliness, and everything else that brings a burden. Political leaders, however, do not see music as a tool that should be accessible to those who are against them. African politics and music does not go hand in hand; however, hip-hop continues to be at the forefront of political contestation in Africa. Music permeates significant aspects of African society, culture, and tradition. For many African artists, music is not just a pastime; it is a ritual” that describes the true essence and humaneness in being of African origin. Hip-hop especially has much significance in fighting back against economic, political, and social inequalities. The mixtape combines different songs on corruption, human rights abuse, economic, social, and political inequality. The central theme in the selected songs confronts political leaders that contribute significantly to the issues that continue to hinder the people of Africa and systems and institutions selling the future of Africa for cheap to western countries.

The history of colonialism and independence in the continent will almost be incomplete without adequate attention to the music and songs used to mobilize people to agitate for political freedom. Social and Political Issues of identity and belonging confront many African countries, especially South Africa. The Cape region of South Africa has long had a vibrant tradition of protest hip-hop music and has had much to protest about colonialism, apartheid gender inequality, to name just a few. Much similar to South African artists, Nigerian artists do not shy away from using hip hop as a combat weapon to tackle and discuss the everyday struggles of their people. Africa’s Political, economic, and social inequalities are closely related from one country to another. The songs in the collection represent the continent as it examines ways to liberate their people from the realities forced on them by continuing corruption.

The first song on the playlist is “Never Again” by Prophets of da City, a hip-hop group that existed from 1988 to 2001. Prophets of da City included three South African rappers, ready D, Shaheen, and Ramone, who lived during the apartheid era. “Neva again” was produced in 1994, the year the apartheid regime collapsed. The song’s theme is hope, and a new beginning, and the possibility of overcoming challenges that the South African people didn’t think was possible. The music starts with Nelson Mandela’s speech, “Never and Never Again shall it be that this beautiful land shall again experience the oppression of one by another.” Used as a metaphorical guide, the prime message of the song motivates the strength of communities and pride in the black identity. It gives great honor to the finally elected first South African president while also encouraging other African countries facing corruption, racism, and inequality. “Neva Again” celebrates the new freedom of South Africa and its liberation from European oppressors and declares that the country would not be oppressed again. 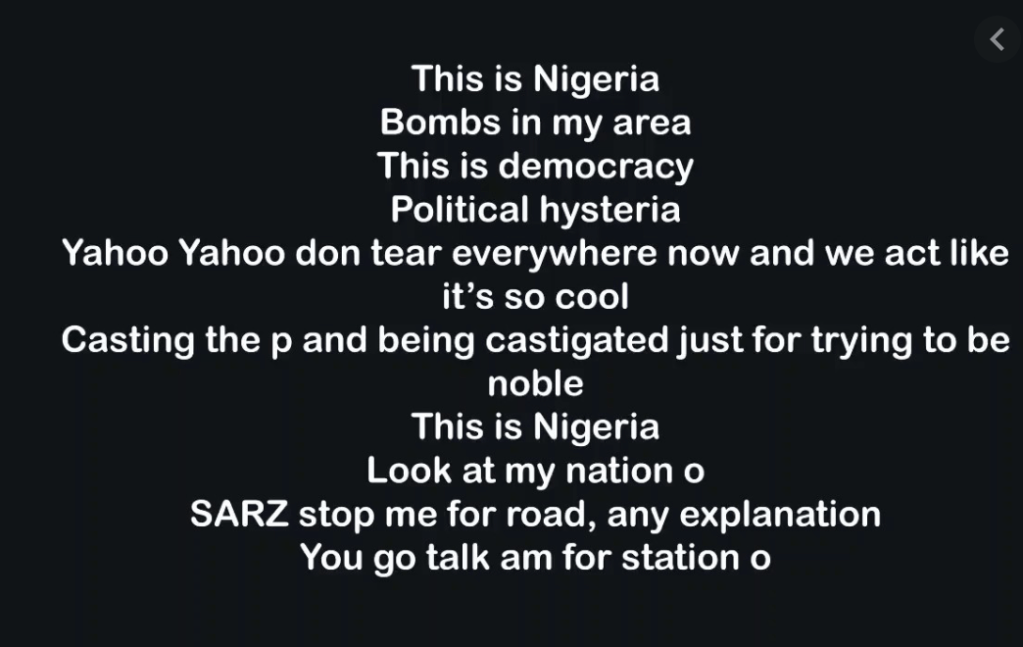 Unlike “neva again,” “This Is Nigeria” by Falz, and “Corruption, Corruption” by Henry Amaze Toe address issues of corruption in religious institutions, human rights abuse, discrimination of gender equality, race, and social order. Falz states that the motivation behind “This is Nigeria” was “to trigger an awakening among the Nigerian people about the numerous political and social issues that are hidden by the country. Much similar to Falz, Amaze also examines the failed promises of government leaders to establish a stable system in which the fundamental rights of all people are respected. Many artists have responsibilities to create and discover art that amplifies that state of their country, not only to call out systems that neglect people but also to create new rules and laws congruent with the needs of their citizens. Songs such as these tackle politicians that make promises during their campaign to get people’s vote; however, once the position is attained, citizens become taken advantage of and neglected.

Furthermore, another South African artist that takes much pride in his African origin is HemelBesem. He delves deep into his Afrikan language, meanings, culture, and lifestyle. He produced a song called “WITBOOI,” a song about a forgotten dream and the focus of a forgotten people. Much like many of his other songs, “WITBOOI” examines everyday issues faced by South Africans. While doing so, the lyrics contain specific Afrikan words that uplift and encourage people to love their culture, language, and tradition. Many people in South Africa were not allowed to be entirely African, especially during the apartheid era. HemelBesem, through his message, wants people to understand the depth of their Africanness and the power of their belonging. In one of his interviews about the African language, HemelBesem said, “It is an organic language, and it is important for us to add to the language. “My message is to dream in the language that you grow up with, your mother tongue, use, and tell your stories”… Sometimes, we gravitate to icons that are not tangible; they are not here, not practical. It’s Hollywood, America, European sports stars.” Hemelbesem emphasizes that external forces from the western world hinder Africans from discovering their belonging. 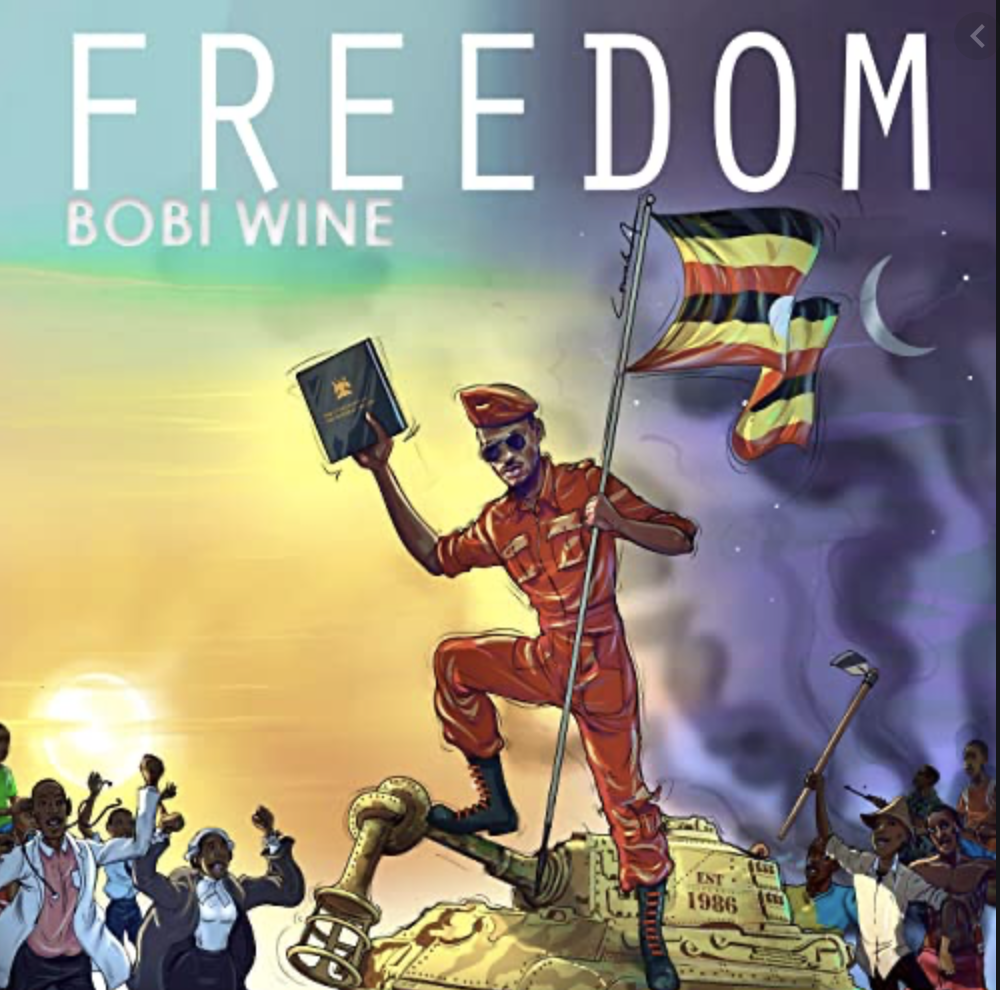 To be a musician in many African countries, especially in Uganda, is to be a freedom fighter, and this is because most songs are discourse about “liberation from colonial injustices such as torture, rape, massacre, forced labor, high taxation, and land displacement.” Neglectful government is the basis for Bobi Wine’s popularity. However, his liberal and democratic vision are attractive to people living under the repressive, lawless dictatorship of Museveni. While currently trending for his disapproval against the current Ugandan president, Bobi Wine has always been the artist from the ghetto that made it out. His 2017 song “Freedom” details a life or death situation of Ugandan people. While this is a song of hope, “when the going gets tough, the tough must get going,” it is also a song that criminalizes the government. In his song, Bobi says, “Uganda seems to be moving backward… “Now we see the whole nation is miserable.” Bobi Wine explains that when freedom of expression becomes a target of suppression, opposition becomes the people’s position. Bobi’s Inspiration for fighting and chanting for freedom has impacted how culturally and traditionally driven Ugandans see their country’s political stability.

Link to the Mixtape: https://www.youtube.com/playlist?list=PLrZPsIsToTT4u_zZC9WFFBr6UzX2U0S6j

Social Media of the artists: