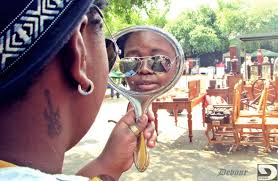 Raised in Daveyton in East Rand Johannesburg, Noluhando Mambolo, presents herself as Devour KeLenyora a South African hip-hop artist. As she describes herself, as a young artist who has grown up with a very musically talented family, she identifies as a “multi-talented artist who is a song writer, singer, actress, rap artist and musician.” Although, her style of writing is rap and hip-hop, she refuses to just be categorized as a single talented artist. Rightfully so, Devour now at the age of 21 has been contributing to the growing hip-hop culture since the age of 12. When she first started, “writing rap scripts and performing them at school cypher circles”, now she has the glowing experience of talent, that cannot be contained in one category of the arts. She was described at the age of 16, as a self-motivated talented artist, who invested a lot of time in learning how to create her own beats, write and eventually produced her own first studio projects. Her talent is transmitted, and inspired from her everyday life, and her personal experience with love, pain, and the possibilities of life; experiences she takes and transforms them in musical poetry.

Even though Devour does not just identity as a rap artist, she was still been nominated as, “ a proud winner of Best Female Rapper at the Bencity Awards in 2012 and the only female to make it to the top 10 finalists of Lil Wayne’s “I am Still Music” tour in Johannesburg.” Which is a start to a very fruitful road, compared to many Hip-Hop female artists today here in the United States. With Hip-Hop as a fundamental to her musical road, Devour continues to express herself as a South African Hip-hop artist who has only just started her road to a long journey of writing passionate political lyrics as a tool of expression today.

In appreciation to Blood on my Hands, by Devour; from a working class sister from Los Angeles:

Blood on my Hands, by Devour describes the role one pays as a resistor forced to play a repressive roll in today’s society. As a South Africa women, Devour; in such a poetic verse expresses such a painful reality so many of us face here in the United States and in South Africa. In the verse, “Fact is, these hunger pain are so bad coseveryday, everyday, every day we practice how to be poor, how to be broke, how to be fucked by the system.” This first verse, speaks to my oppressed reality as a women of color, living everyday as a hustler with capitalism. She says, “everyday we practice, how to be poor, broke, fucked by the system, in my interpretation as in society all we know what to do sometimes is hustle, because we have to learn how to survive before we could give our selves a change to life. In a society ruled and shaped by capitalism, living becomes a luxury and surviving becomes part of your identity to the class you now belong to. Devours music is revolutionary, when she says in her verse, “kill or be killed that’s the motto for my manzez”, for me self/defense and freedom to say what you need to say, at the moment is what she’s referring to. Her lyrics refer to her experiences but her verses are of the moment she is living in and how she is handling her reality piece by piece moment by moment. Devour at my age now has been able to develop her identity as an artist and has been able to impact my musical choice by expanding my search in finding music that can easy my soul, when I feel most alone in the struggle. As a women who eases her solidity by listening to hip-hop as her escape from surviving to living for a moment.