In the music video for “Le Poids de la Tradition”(The Weight of Tradition), Duden J and his collaborators create a narrative that serves to display a Burkina Faso tradition. The music, on the other hand, is very much influenced by American hip-hop styles. The narrative takes place in a village. There, they have an area for “un jugement”. In this case, everyone gathers over the accusation of witchcraft. 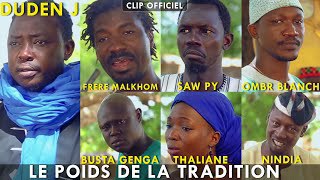 The chief is stationed at the top of the circle to hear everyone’s account. All of a sudden it seems as if they’re at a cypher when each witness raps their account to the chief. As the story continues, the viewer is exposed to more information about the conflict. Everyone thought the victim was dead until Duden J stood up to serve his account; he was the victim. In his verse, he explains that his brother-in-law accused his wife of witchcraft to become a sole beneficiary. The unexpected ending to the video conveys a strong message on issues about accusations such as these.

It is clear that American hip-hop has influenced Duden J’s style of rap. Duden J said in an interview that one of his inspirations is Nas. Both Duden J and Nas have an intense and fluid style. Duden J also considers Nas an inspiration for his topics. He appreciates American hip-hop that uses its platform to convey strong messages. In hip-hop culture, these messages are usually contestations of the system whether it be political, cultural, or economic. In this case, the tradition of sorcery is the system that has the potential to hurt the innocent. The beats that are used in this song are similar to that of Nas’s time. The music production includes piano beats and drum beats. The piano beats immediately remind me of Dr. Dre’s production of “Still D.R.E”. and “Murder Ink” in 2001.

“Le Poids de La Tradition” music video takes hip-hop culture and makes it relatable for those in Duden J’s culture. He cleverly mixes African culture and hip-hop culture as he utilizes the themes of hip-hop and applies it to an issue that he witnesses in his life.