A Message of Hope

Wagëblë is a four man rap group based out of Dakar, Senegal, but they have performed around the world. Their “name connotes the communal meeting place for the people to discuss the issues that affect their lives” and the title track off of their last album, “Message of Hope” (2011), expresses how their music has allowed for a positive discourse about trails facing the Senegalese community, such as the political riots and protests that occurred around the time this song was released. 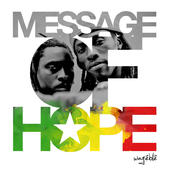 The song begins with an audio clip from a newscaster praising “a group of young musicians”, Wagëblë, for spreading “a message of hope” for the next generation in a time of hardships and trouble. This media story is sampled throughout the track, which leads me to believe it was the inspiration for the song and album.

Wagëblë raps in French/Wolof, but here are some of the translated lyrics that most express the purpose of this song.

“The story of our lives informs the content of our music and philosophy.”

“Wondering how to remove the pain of the streets, bring renewed hope to my people – realizing my dreams.”

“We rap to express the experiences in our lives. We rap to explain the nightmares in which we live.”

“Witness the desperation of an entire generation.”

“I’ll never stop voicing the pain of the people I represent.”

Wagëblë uses “Message of Hope” to explain why they make music and hint at the importance of it – giving Senegalese people a musical outlet for their struggles.