Color: the property possessed by an object of producing different sensations on the eye as a result of the way the object reflects or emits light.

From my knowledge and experience, colors captivate not only the eye, but evoke specific emotional and psychological responses in human beings physically. For decades, the urban youth have utilized blends of hues to express sentiments, awareness and inner passions in the form of graffiti. On Saturday, April 7th at in front of Trinity College’s Mather Hall, I visited a beautiful graffiti exhibition which showcased gifted artists from all over the world as part of the 13th Trinity International Hip Hop Festival.

The installation included two large cubes which featured graffiti paintings on each of the four visible sides of each cube (eight paintings). Each piece showcased bright color combinations which told a story. For example, Marcelo Ment from Brazil did a piece which showed a woman with colorless parts of her face while her hair was made of a variety of bright and warm color combinations. Another side of the block showcased the turquoise, green and blue mixture of a girl’s French braids, with pink accents. The colors complimented each other and flowed like mystical water.  In addition, Artists Lindaluz Carrillo, Kamil Kucharek, and Poptart from Hartford, and Yuanjie K-Ching Qian from Montreal all composed their pieces within minutes, leaving their mark for all to marvel. Their work represented a culture of conscious art which I personally revere especially at a time in which Graffiti is going extinct due to gentrification. During the exhibition, another viewer mentioned that with less spaces left unoccupied by cameras, there are less opportunities for graffiti artists to tag areas with messages. The conversation led me to further appreciate the art, not only for its authenticity, and cultural impact, but also for its endangered state. 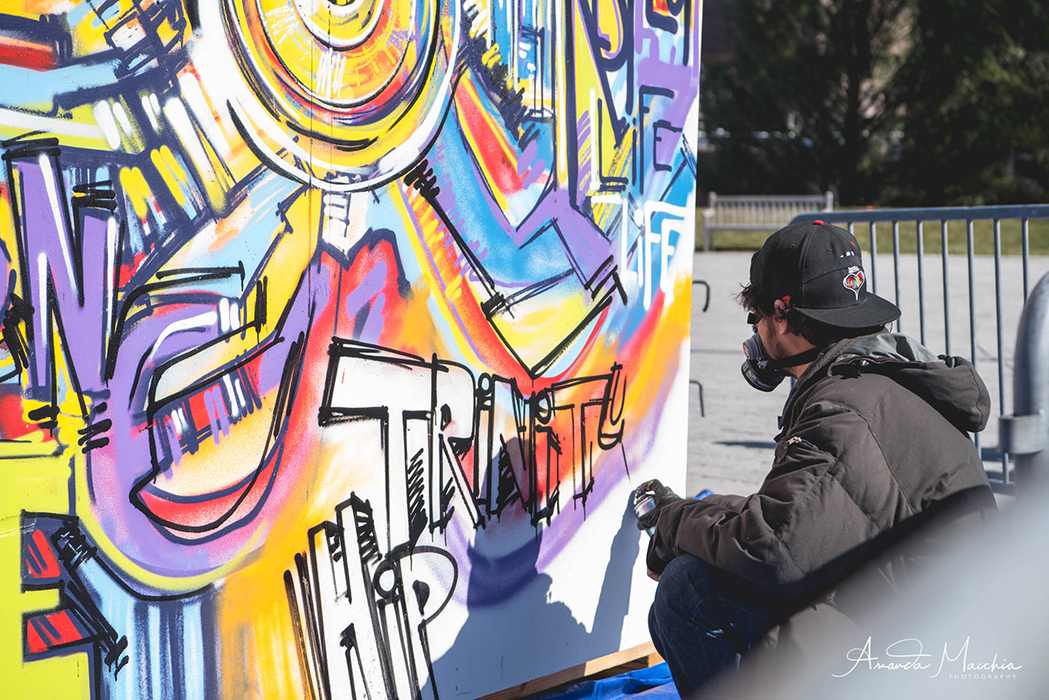