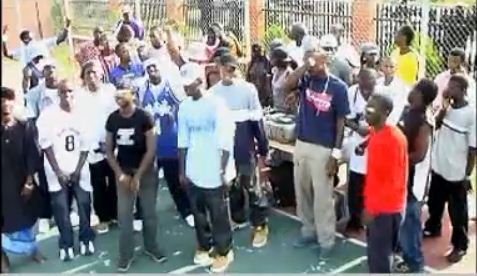 According to an article on Bella Naija, “Oya” is a 2001 collaborative hip-hop song by the hip-hop group Trybesmen, which consisted of three rappers, Eldee, Kaboom, and Freestyle, and their label-mates.  These labelmates included artists Sasha P, 2 Shotz, Blaine, Dr Side, Oradell, Double O, Dr. Timid, and Myst. The entire collective, and by collective I mean Trybesmen plus their labelmates, called themselves Da Trybe.  Bothgroups’ names, Trybesmen and Da Trybe, remind me of the American hip-hop group “A Tribe Called Quest.”

The song, in its YouTube comments, is referred to over and over again as a “classic” song.  I believe it may be a quintessential Nigerian hip-hop song.  The song’s music video and comments about the song may be found via YouTube at THIS link.  The first 1:30 of the video is a “Making Of” clip, and the actual song begins at 1:31.

I like the music video very much.  I can appreciate that while the chorus of the song goes, “C’mon dance, work it baby, dance for daddy, move like crazy,” and there are women twerking on film, these dancers wear all of their clothes, no make-up, and natural hair as they bust it and back it up.  They look like regular women.  What is more, I also like that the video is staged as simple party that anyone might have in their own community.  There are no expensive clothes, cars, or supermodel-looking women.  They are just enjoying their music and having a good time.

“Oya” runs over 5 minutes.  I believe that its beat is reminiscent of not only African hip-hop and American hip-hop, but also Nigerian afro-beat.  What is also striking to me is that the artists’ have many varied accents.  Some of the artists sound more Anglophone than others and some appear to be imitating American accents.  Even further, some of the artists appear to code-switch between accents on their own verses.