A Luta Continua in “African Time”

In anticipation for Zeus’s fourth album “Pieces of the Now” after signing with Sony Music Africa in 2017, let’s roll back the clock a little… 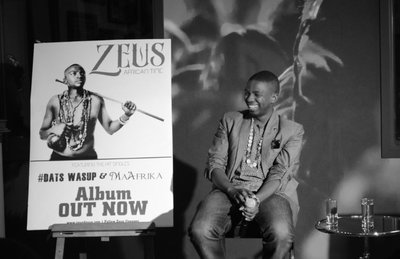 With his third album, “African Time” (2013), Botswanan-born emcee Zeus (AKA Game Goabaone Bantsi) established himself as a true conscious hip-hop artist. Throughout the album, Zeus’s verses, predominantly delivered in English and Setswana, brim with current and intellectual and allusions. In a 2015 interview with BBC Radio 1Xtra’s DJ Edu, Zeus professed his desire to end the xenophobic social traditions that continue to haunt the South (e.g. South African and Botswanan relations) and embark on a new path of African brotherhood and unity.

Throughout his track list, Zeus peppers in sound bites from some of the most significant speeches in 20th century African and U.S. history including those by Mozambican revolutionary Samora Machel and American Black Power Movement leader Malcolm X. With his implementation of these speeches, Zeus emphasizes the need to re-contextualize prominent moments of movements past to not only create progressive content, but to gift an awareness of their significance to the receiving youth. Having become a Mandela Washington Fellow in 2016, Zeus seeks to bring Botswanan music to the forefront on an international scale.

To get a sense of his effervescent stage presence, watch Zeus perform live…in what is probably the world’s dopest blazer…here:

Over the past few years, Zeus also collaborated with DJ Nio and the Nomadic Wax collective on their “Internationally Known Mixtape.” The resulting track, “Black Tears,” expresses a weariness towards Africa’s colonial past. Immediately laying in with “liberated tongues speak of generations of sorrow/I use the blood of martyrs to paint a picture of tomorrow,” Zeus defines his role and creative mission as a conscious artist. “Mama Africa with black tears I cry for you/ your sons and daughters that went to war and died for you can never rest in peace/ cuz they never lived in it/ paid the price for freedom just cuz they believed in it”, he continues, “now we reap what they sow/ but what their struggle means I don’t know if we know/ where’s our piece of the globe?” The track expresses a dissonance between past and present struggle and the acknowledgment of the status quo as not living up to the hopes and efforts of one’s ancestors.

And… Keep up with Zeus and all of his latest antics/social commentary here:

One response to “A Luta Continua in “African Time””