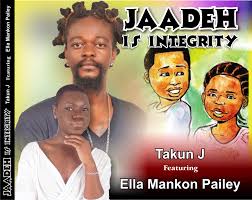 In 2012, Liberian activist/author Robtel Neajai Pailey published Gbagba, a children’s book that sparked a national dialogue on corruption. The book has been assigned to Liberian schoolchildren, and seeks to help rectify the state’s systemic corruption problems. The book is under review by several ministries of education in neighboring countries. This February, Pailey released the book’s sequel, Jaadeh! Both books have been adapted into hip-hop songs by hipco artist Takun J. The songs, titled “Gbagba is Corruption” and “Jaadeh is Integrity,” plead for Liberians to maintain their honor and integrity by saying no to corrupt practices.

“Gbagba is Corruption” was released in 2016, and was made possible, along with its accompanying music video, by a grant from the Open Society Initiative of West Africa. The video begins with Takun J handing out copies of Gbagba to a crowd of Liberian children. Takun J immediately breaks out into the song’s chorus, which urges the children to “say no to corruption, and you’ll be alright.” The rest of the song’s content is Takun J rapping over video clips of a young boy and girl engaging in corruption. He raps quickly, over an ubeat rhythm, a common characteristic of hipco music.

“Jaadeh is Integrity” includes a female accompaniment for the chorus, an artist named Ella Mankon Pailey. She sings that “The only way we [Liberians] can live is through jaadeh,” and “corruption and gbagba we can’t accept. Although the beat is slower than that of “Gbagba is Corruption,” Takun J maintains his speedy rhyme delivery. The video, also made possible by a grant from the Open Society Initiative of West Africa, pictures Takun J on a beach, alternating with Ella Mankon Pailey twirling around in colorful Liberian clothing.

Hipco music is commonly used as a political tool, disseminated to Liberians in the Colloqua language, a mixture of local languages and English. Hipco has been used as a means of national reconciliation following Liberia’s civil wars. Takun J is the self-proclaimed and Vice News endorsed “King of Hipco.”