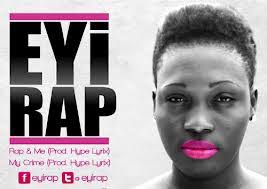 Eyirap is a well known female MC from Accra, Ghana. She is extremely talented and her song “Rap and Me” makes sure no one forgets it. Eyirap uses this song to tell the world she is the best in the game and no one can tell her otherwise.

“I understand the game so always I deliver..”

“Take me to the war zone and I’ll face Hitler..”

“I’m business minded I have come to annihilate..”

Eyirap uses the lyrics above as a sort of braggadocio. She establishes her dominance and credibility by saying that she can kill off anyone with her rapping ability.

Within the lyrics she also goes against norms set in place for women as well as states why she raps in general. This can be seen in the lyrics below:

“I’m here to make money not to make marry..”

“Baby loves mama so imma do my baby proud..”

Unlike the societal expectation for woman to marry, Eyirap says that she is alive to make money not to get married. She then goes on to also say that she does this to make her baby proud because they look up to her.

The video for this song was very similar to the average male MCs music video. Eyirap was definitely the boss in the video which could be shown by her large posse that was behind her throughout the video. The video was also very dark with fire throughout many scenes in order to visually intimidate. As seen in many male MCs videos, she also had women dancing with close ups on their body. The video, both, fits the stereotype of women in music as well as negates it.

Overall, Eyirap uses her song “Rap and Me” to voice her dominance and stance as one of the best in the industry.