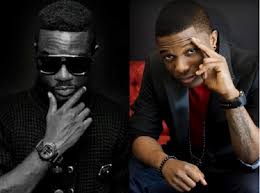 I’d like to draw your attention to two very talented African artists that have been making major mainstream noise in the music industry and show no signs of slowing down in the future. African rapper Sarkodie and African pop artist WizKid both are musically talented artists but vary differently in the deliverance of their genre of choice. I am going to compare style and lyrics from Sarkodie’s song Adonai ft. Castro to WizKid’s song Ojuelegba. Adonai begins with a nice beat and then soon goes into a steady uptempo tune with Castro speaking and then followed by Sarkodie. Now, this isn’t your average hip-hop song that normally would catch you off guard but Sarkodie is making an ode to God for blessing him with gifts such as his talent amongst other things that he is grateful for. For an artist such as Sarkodie, he raps mostly in his native language which is Twi so you will not understand anything in the song except for the part “Hallelujah”. As noted, he does rap rather fast and he carries all the qualities of being a rapper such as the dark glasses, the choice in clothing and the hand gestures he uses. His style can be considered multifaceted which is always good for rappers trying to tell stories. On the other hand, you have a softer mellow beat when WizKid’s Ojuelegba comes into play. I first heard this song on the radio because the remix had featured Canadian recording Drake. Ojuelegba speaks about Wizkids experience in his native land Nigeria. Unlike Sarkodie, WizKid sings in English use what it sounds like, a little of autotune to enhance his voice. There is one shot in the video that shows him in the studio wearing dark glasses and his chains which definitely separates him from Sarkodie but both artists show gratitude in their songs.